Well it is all over for another year.
We had a lovely day here filled with family.
I did very well on the present front this is my lovely gift from Kim I had a box filled with lots of wonderful things. A tree wall quilt which has so much work in it...... lots of bits and piece...it is fun to get things from over seas even the little ones like the sewing machine thread cutter I have never seen them here in Oz. Kim must have know my fav colour is green ...now to think of something to make out of the lovely jelly roll. Some bags handles and a couple of patterns. 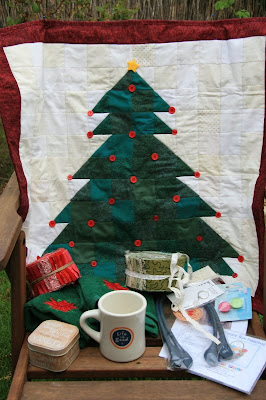 Thank you kim it was a great parcel I will try to adhere to the message on the mug.
"LIFE IS GOOD"
Do what you like.
Like what your do.
A big THANK YOU to Donna for her fantastic organising of such a large swap.

Before Christmas I won a give away on Lisa and Sarah's blog and this lovely goodness arrived 2 days before Christmas so I tucked it under the tree like a good girl. 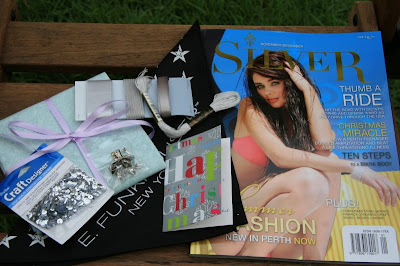 Thanks girls the magazine is very nice.......... Lisa has a section in it filled with her wonderful crafty ideas.

Merry Christmas from Mel & me

As Christmas day closes in Mel & I would like to wish you and your families a safe and happy Christmas.

This one's for all my bloggy friends in the northern hemisphere.

2 posts in one day

I received the sweetest card today all the way from England.
It was handmade by Milo see here 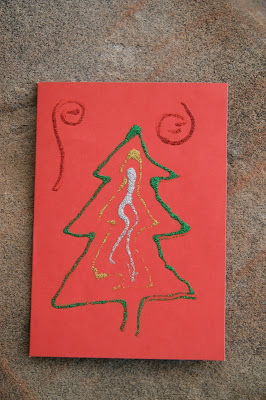 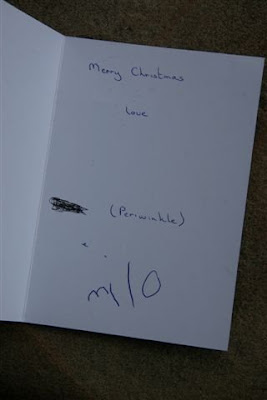 Firstly is anyone else having trouble with Bloglines the other night I logged on and had 4,0000 posts waiting to be read ......I thought boy you guys had been frantically busy then I looked at Chookyblue and she had 200 posts waiting for me to read. I decided to clear everything and then the next day when I logged on it happened again. I have cleared them all a second time and all seems to be back to normal. However I have missed some posts.

Now on to the good stuff. My SSCS parcel arrived all the way from New Jersey it 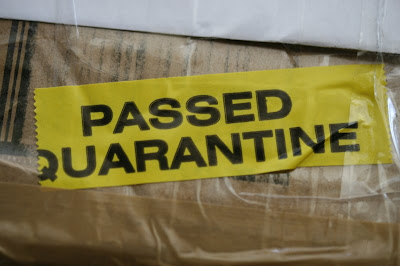 It was opened by someone other than me. 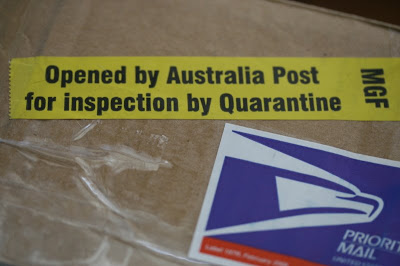 I have only opened the card so I could let Kim know it had arrived. 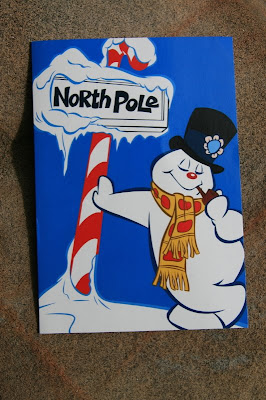 I have been very good and the box remains sticky taped shut under the tree.

My work is moving in the first week of the new year so life is a little more hectic than usual so if I am missing in action for a while forgive me.
I have been given some awards and been asked some questions from No -reply bloggers so will attend to all that stuff soon. 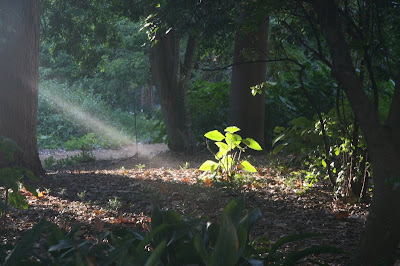 I don't usually do this but there is an amazing give away happening over here so go check it out. More of this should happen it's what life is really about.

I made this pin cushion last night it is an Anni Downs pattern "Larry the Lamb" it is one of those things that when you have made it you just love it. I will make some more as gifts. I even sourced some silica sand which makes it feel really great.

I also made this bag as a shop sample for Hettie's Patch.

For Sean's birthday Gemma bought him a Parachute jump....it wouldn't be a day out without Mel tagging along.

It was a nice day with a gazillion flies.....Mel desperately wanted to jump out of the plane but due to Oc health and safety he was not able to(take that as I couldn't get anyone to strap him to their chests and jump out of a plane).

he just had to hang around and watch.

Benny is a seasoned jumper coming up to his 150th jump he has all the right gear which is important when your jumping out of a plane.

This is Lisa and it was her second jump she is Benny's girlfriend and they are friends of Gemma & Sean. I was mighty temped to have a go myself as she got to jump strapped to the front of that very nice looking man ......

This is part of the preamble I'm pretty sure it's nothing like the real thing.

Here she is coming into land.

Only Lisa can land a parachute jump waving like a princess.

A FUNNY STORY
When we got to the sky diving place there were heaps of other people there some who jump all the time others like Sean and Lisa doing tandem jumps. Gemma & Lucas tolerate Mel but I have to behave myself while around their friends however Lisa and Benny have been out and about before with Mel. I put Mel down on my camera bag alongside Gemma and went for a walk. A little time later Gemma came up to me and said a man had come up to her and said "I know that monkee it is on the internet sitting on a bike" She answered it's my mums and she is a bit mad.......my answer would have been why are you trawling women's quilting blogs???????.
Mel was just excited..... like the good old days he can't go anywhere without being recognised.

I went to Ikea today and bought a

frog and a funnel as you do.