3 years ago Lucas got his drivers licence. He would have liked a 6 speed ute with mag wheels and an exhaust pipe the size of a milk can however he got this. 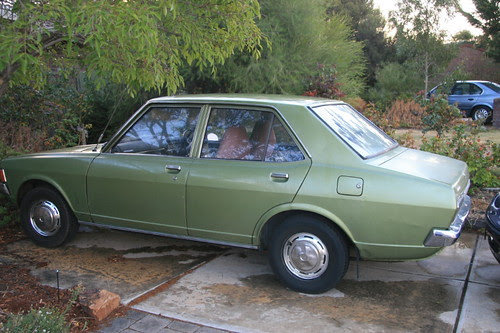 We bought Gazza(Galant) as he has been affectionately called from "The Dodgy Brothers" for $999. for cash. If you are Australian and my vintage you will know someone who has had one of these cars. It has been the best little car it starts every morning and has transported Lucas and his mates around, mind you I wouldn't set off on a trip to the country in it.
Lucas bought himself a station wagon as he needed something to carry his tools around so we advertised Gazza and someone came and bought him today. We were all very sad to see Gaz go it was the end of an era.

Look who I caught going for one last drive in Gaz. 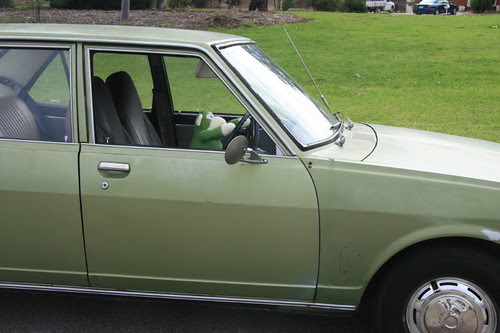 When I went out to investigate look what I found. Mel back to his old tricks. 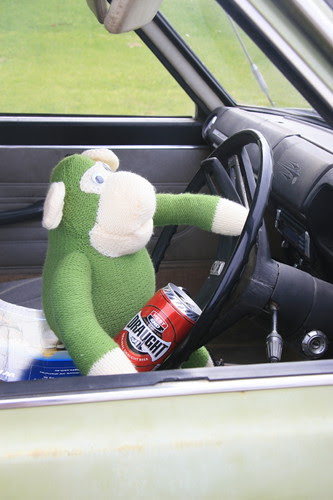 One would have thought he might have learnt from his last unfortunate brush with the law.

Then I opened the door to find this, at least he would be O.K. if he needed to ring someone. 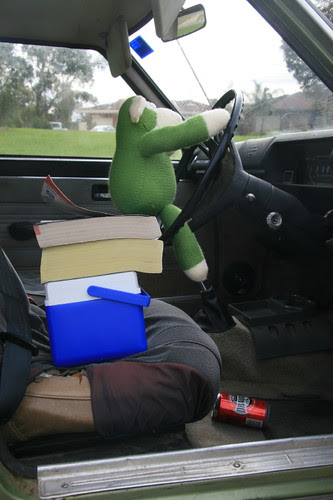 Today while I was at work I got a text message from Sean, Gemma's boy friend. Sean works at the airport it read "Leanne there is a lady at the airport taking photos of a teddy bear sitting on chairs and looking at planes. Your not insane I have decided"

Have a great weekend.

Wow - Gazza is/was green-ly gorgeous! I'm not surprised Mel wanted one last spin! The photos really made me laugh - but the best bit in this post is definitely the text from Sean! So glad to see there are plenty of "people like us" around!!!

Mel and the Teddy have creative, fun families! Love the post..started the day with a belly laugh! Thanks.

Pictures of teddies in the airport ... too fun! Mel better watch out ... drinking and driving could land him in a heap of trouble!

i love your blog, just found you, love Mel, i made one too.
Sarah x

What a fun, post. And it's good to meeet Mel. I will hae to drop by again to see what you and the little green guy is are up to:)
I thought your project was beautiful you should be very proud of your self.

Love Sean's text message, thanks for the morning laugh.

the car is gorgeous - had i known he was for sale......
good to hear that sean no longer feels you are insane. there are plenty of weirder people out there!!
l
x

You take the best monkey shots! What a shame you got rid of the green car .... it matched Mel brilliantly!

ps. When we were in Prague last year I saw a lady sat alone taking a picture with a stuffed elephant in the foreground. I guffawed .... AND THEN I REMEMBERED WHO I WAS AND WHAT I DO! Eek!!

Great txt from Sean.....made me laugh......Know what you mean about the car...Mark aspires to a WRX but has a little Pulsar -(Pete)!

yes truly is the end of an era selling on the galant isnt it. hope it went to another young driver to enjoy.
now mel, no phoning while driving - it is dangerous you know! (the pics are great leanne - reminded me a little of mr bean!

love the text from sean too - priceless

Leanne, there is a comercial on T.V. in the states about a little girls that puts her little stuffed animal into her dad's briefcase b/4 a trip and he takes pic's of it all over with his camera phone (it's a cell phone comercial). So, I'm thinking maybe they got the idea from you? LoL. Cute... Now, if he could only get one of his buddies to work the gas/brakes... although, he shouldn't be drinking and driving!

Mel, no drinking and driving allowed!

Great monkee/car coordination going on there! Poor Mel really should not drink and drive - he's bound to spill it!!

Gazza looks like a perfect first car. I hope his new owner loves him as mcuh :)

We all know you're not insane, don't we?! Which reminds me, Ruby has not been blogged for some time.......

this is so Fricking hilarious....you are to cute

I always enjoy your posts about Mel. He's such a character. Funny about the lady at the airport. Wonder if she's a blogger too.

How is this driver? i hope a good driver1
ciao ciao

You know this is hilarious, right? Always sort of sad to see "old faithful" go. I usually get over it quick as it takes to sit in it's replacement though!

You are so funny! I sure enjoy seeing your photos! You must have a fantastic time dreaming up all these shots!