I have been up since 4.30am Gemma & Sean flew to Queensland for a lovely 11 day holiday, as I drove home I wished I had been going also as it was so cold and wet.
I can show you what I made as my PIF gifts now that they have arrived safe and sound. I had an unusual PIF this time. Levin who left the first comment was also the winner of my 100th post give away so I will make her something a bit different she most probably is thinking she will never receive it but I have finally made up my mind on what to make..... so Levin you only have to be patient a little longer.
After sending serveral emails to the second commenter for an address and getting no response I decided she had changed her mind and didn't want to play along. Way down the list Born to Read and Knit had thought it such a good idea she started her own so I thought she was a good recipient so she became the 2nd person.
The third person was Sorrow and she perhaps didn't need to pass it forward as she does it all the time. She has an etsy shop and proceeds from that go to different charities. She does the most amazing pottery and paintings have a look at what her daughter has on her bedroom wall.
This is what I sent them....... I know I have made this before but this one was made for posting unlike the one I made myself which was framed. 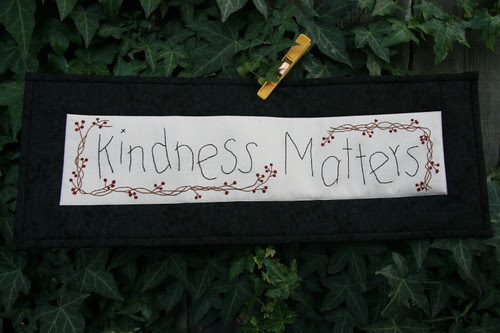 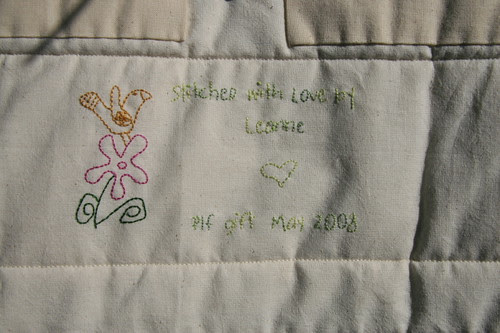 Perfect PIF gift Leanne. I never tire of seeing this. Can you tell us where you got the pattern from please?

Leanne, those are beautiful works. Your PIF recipients are jolly lucky folks.

What a great gift to send....I must start work on my PIF gifts ... only two people have shown an interest so when I am ready to send them off I will ask again if anyone is interested and if not I will just choose someone from my blog list at random and send it to them...of course they won't have to PIF if they don't wish to.....I love your little label on the back too!! I am loving this weather...Mark and his GF flew to Melbourne on Sunday for a few days....they had to be back for something later in the week but I am sure they will have a great time away.....I am looking forward to my little break at Loxton!

A Spoonful Of Sugar said...

Beuatiful work Leanne! I love your little autograph on the back - a perect finishing touch!

They are so lovely! The recipients sure are lucky- you must have been very busy lately.
nicky

What a lovely PIF gift Leanne - you have some very lucky recipients! Lucy x

You make such lovely things. I think I should be more industrious that way. Most of my gifts are hand made soaps and oils but sometimes, at Christmas, people get sewn/quilted items.

This stitchery is so lovely, and a perfect PIF gift!

It's wet and grey here at the moment - hope the two travelers have gone further north *!*

A lovely gift and a wonderful sentiment.

Kindness Matters. What a wonderful sentiment!! And that sunset is sooo eerie, I expect witches to fly from the sky!!! CAthyxx

I love your label too! Your PIF recipients will love them!!!

G'Day,
Lovely pictures and stitchery and I love your monkey business pictures around Adelaide.

wasn't it cold on monday! we went into town - we caught the bus in. part of me thought i was insane, but the other part thought it was a huge adventure.
it's been so cold all week - we've been stuck inside and i can't quilt cause i've hurt my back........hmmmm not fair!!!
i'm getting excited to see what my pressie is - but i'm happy to wait. my pif recipients have been waiting a long, long, long time.....
l
x

I love my gift and it fits perfectly on the table next to the chair where I sit and knit or read. Thank you Leanne for thinking of me. Kindness really does matter, it makes someone feel better however badly their day is. I say we all do something for someone else today, a smile, a compliment, a gift, a helping hand, what ever you can. It makes a difference.

Oh, the label is the best one I have seen in some time. Great job on your stitchery!

They are very lucky PIFees - your stitching is beautiful :)