I live in South Australia the driest state on the driest continent, as I have said before we have been in drought conditions for a few years now.
While I was driving to work on Thursday I heard on the radio that they didn't think the Popeye would be running on the weekend.
This is what happens when you pull the plug out and forget to put it back in.
This is the Popeye. 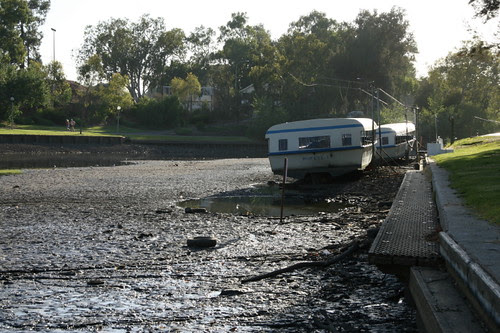 During the night there had been a malfunction of the weir and the River Torrens had emptied. The River Torrens runs through the middle of Adelaide from the hills to the sea. 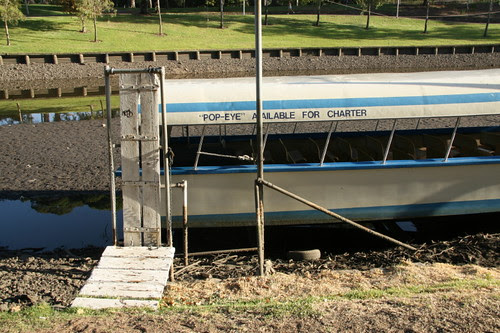 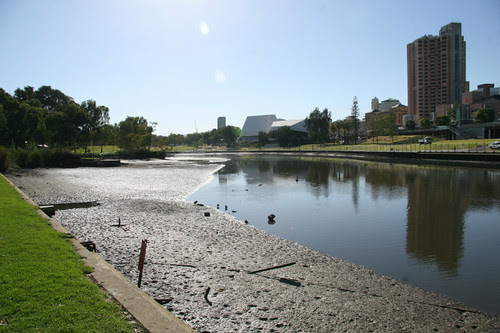 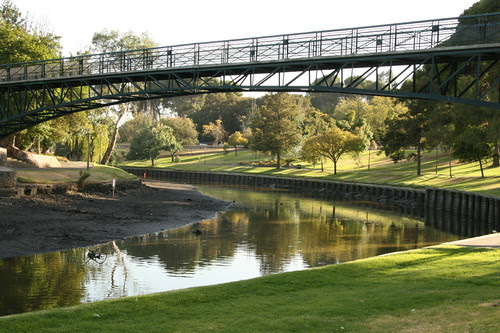 This is the fountain along with assorted rubbish. 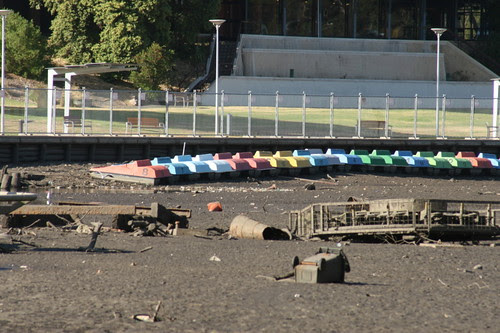 This was the fountain back in September last year. 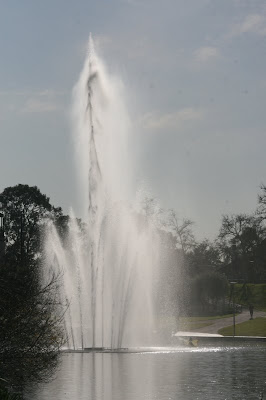 This gives some idea how much water washed out to sea, this is the boarding platform for the Popeye. 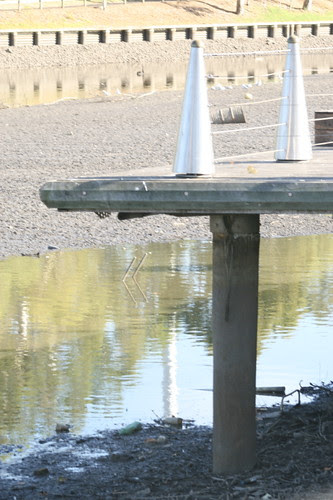 Not only is it a tragedy that all that water ended up on our metropolitan beaches but soon it will be a horrible smelly mess. They do not know how they will refill it as water is something we don't have an abundant supply of.
They have found submerged cars. 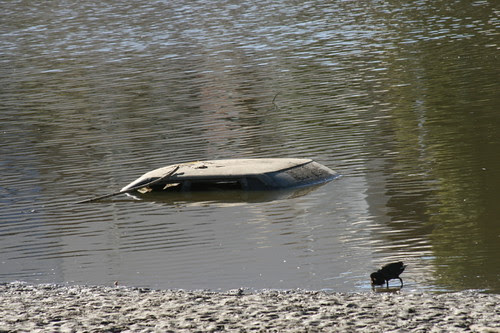 However these 2 birds didn't seem to mind the extra perches the rubbish provided. 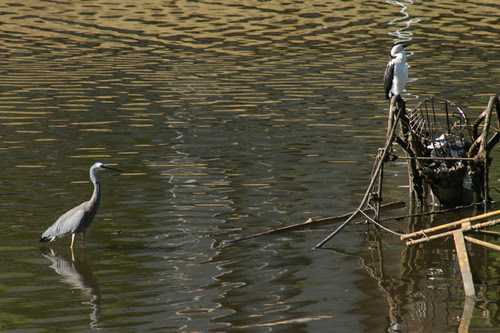 If you want to have a look at what is happening in other peoples world head over here.

What a situation. What a dry river! Wow. I hope the river flows again soon!

OH my! What an unpleasant surprise. I cannot believe all the tragedies befalling Australia in the past few weeks and months!

That is very dry indeed. My daughter often told me about the drought they had had some time ago. It is something I cannot imagine, for it rains here more often than not. I hope you'll have rain very soon.

That is so sad! and what a mess! But your pictures are terrific and seeing what it looked like before just makes it that much sadder! I hope you have rains soon! Thanks for sharing and have a good week!

Scary to lose that much water, especially when it can't easily be replaced. The stranded boats look very forlorn.

That's what I call "low water," and not seasonal, that looks like a decadal low.

This is amazing. Hope you get some rain so it fills back up fast. Maybe litter clean up first.

I can't believe these shots as I used to live in Adelaide...let's hope the terrible drought ends real soon..

How unfortunate. I suppose they could use this opportunity to clean it all out and give it a bit of a dredge, then pray pray pray for rain. Sigh. Poor Australia has been taking it on the chin too much these days. My condolences.

I think you need some extra rain. I liked the photos but i want to see that place again in winter, after raining.

i heard on the radio that they found some water in an old quarry up in the hills and they are going to use it to fill up the torrens again. don't ask me how.......
they should clean it out before they fill it though :)
l
x

OH my gosh, how sad.

Oh what a shame. It's sad how rivers get treated as a dumping ground too. I do hope they get chance for a clean up before it refills.

Hard to believe that happened to your poor river, but your amazing photos prove it.
Good luck through the drought. Israel is drying up too.

Thanks for your visit. A kibbutz? Which one, when? Nice!

Oh my goodness that is a sad loss, I understand about being dry here too.

How awful the drought must be. If I could send you some of our snow I would!

Nice one Leanne! My daughter feature the spectacle on her blog as well. If you wish, check out "not all those who wander are lost"on my blogroll.

Thanks for the photos-haven't had a chance to look yet! We are a tourist attraction but for all the wrong reasons! At least there will be a clen up. Poor Popeye!

the ridiculous thing is that they're now establishing a temporary pipeline to pump 2 gigalitres [a LOT] of water - that they've found in an old quarry - into the river.
meanwhile 90 year-old grannies in Adelaide are carrying buckets to irrigate their precious gardens, due to water restrictions that forbid the use of a hose.
how does this make sense?
if that much water is suddenly available why not add it to the shrinking reservoirs?

Wow! It looks so sad empty like that! But maybe they can give it a good clean up before it fills again. How people can just throw their trash into a river is beyond me! :0/

How terrible, losing all that water! They say that oil is such a precious commodity, but I think I'd vote for water! Hope they can have time to remove a few of those old wrecks before they re-fill! Cheers! Mary Ann

Thanks Leanne for putting up these photos. I was going to do the same last week-end but it didn't eventuate. Last night on the news it said that some water is going through - let's hope there will be lots of rain without spending half a million on getting the water from the quarry.

What wonderful pictures. It is so disappointing this happened. Looks like they have cleaned it up a bit and got some water flowing. Not sure from where, they were talking about the quarry. Anyhow, I love all your photography, whatever the subject!

Gosh, I am so sorry about all the heartache, both flood and fire your lovely continent has suffered lately! Hope it is set to rights as soon as possible.

Thank so much for let me take the pattern... when finished I created a link to your post... this way you receive the visit and people know all your works...
Is so sad the situation in your country... I hope that the weather improves in these days and everything back to normal ... Also ending the fires that so many families are hurting and destroying the forests...