My god, 2 posts in one day but holidays can do that to you. As we have had a few country trips of late and I find it easier to knit in the car Mel was born. At first I thought I was making a Teenage Mutant Ninga Turtle. 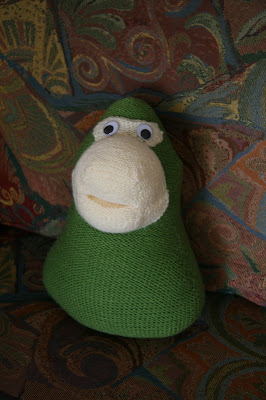 Funny how limbs can help. 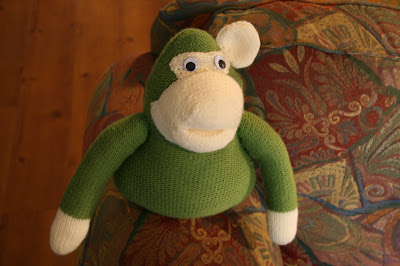 If you have not been to Monkee Makers blog head straight over there she is the funniest person so in her quest for monkey domination I thought a monkee made of knit could have some adventures in Adelaide. The family had a meeting and we came up with the name Mel(so named after the very sexy Mel Gibson). As today was such a beautiful day Mel thought it would be good to go to the beach. Mel was a little apprehensive at first and thought a walk up the jetty would be good before going down on the sand. Please note Tony standing up the jetty trying to look like he is not with the strange women taking photos of the monkee. 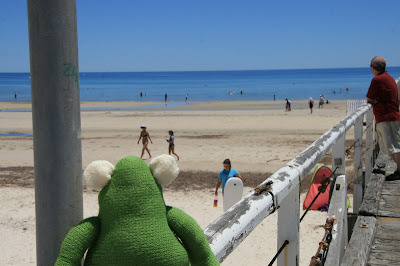 Mel liked what he saw and decided to do a bit of sun baking I tried to talk him out of it as I am very conscious of the suns effect but he just wouldn't listen. He did apply some sun screen then when I looked around he had a can of beer opened this was also a concern as we all know the real Mel has a tinsy winsy drink problem and Australian beaches are dry zones so he was just asking for trouble. 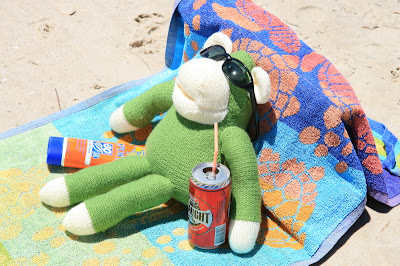 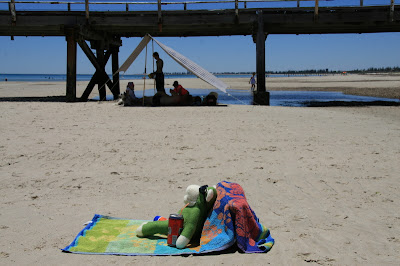 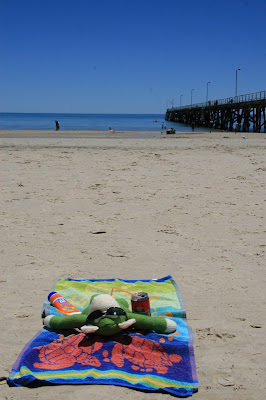 I had to be very careful taking these photos as here in Oz if you get caught on the beach taking photos you get dragged off the beach your camera confiscated and the hard drive on your computer checked. I was quite confident I would be able to talk my way out of a pedophile charge however taking photos of a monkee made of knit might lead to a stint in the nearest psych hospital.

You are so funny! I love your froggy monkey!
No drinks and no photos on the beach????
That‘s new to me. I suppose drinking water cannot be forbidden?

OMG, AND you were taking NUDE PHOTOGRAPHY. I'm telling your mother.

I seriously think Mel (or perhaps you could make a George (Clooney) brother who could travel to quilters (like me) and have his own blog. I tried to talk Lucy into doing it with one of her dolls but they wouldn't leave home without her.

What do you think?

Interesting ... following Mel's development. A bit of a rascal he seems ... tippling on the beach!

No photos on a beach ... now that WAS surprising!

I really enjoyed the adventures of Mel.
Thankyou for taking the risk!

I'm smiling. Had a good laugh while reading this post. I'm glad you took all those risks and let me enjoy Mel's adventures. He is a happy monkey.

OMG, your post is too funny! I personally would have named him Mike or Michael after Michael Douglas...LOL but then we all have our personal favorites. LOL Mel is just too darn cute & I really enjoyed your pics, thanks for sharing. Happy New Year!

Ha ha - great to see some down under monkee action - as it were!! Good job Leanne - risking life and limb daring to take dodgy beery monkee beach photos!! The monkee quest continues.....

which is beach is that? looks very much like the beach we were on this morning but i didn't see any monkeys drinking on the beach.
mel looks gorgeous. how are you coping with the heat - i'm not. really not coping.
cheers
l
x

Your photos make me laugh! He's a cute little guy.

Imagine not having any photo's of your summer holidays on the beach !

How funny! Lucky you didn't get caught! Otherwise you would not be able to share this with us! LOL

Love that monkey- where can I get a pattern?

You are funny Leanne! I enjoyed your creative photos of monkee :)
What fun!
Loved your flower photos too...you are very good with photography!

Ooh, I loved the picture of Mel with no legs!

When I saw your beach pictures I said to RGH "Mum and Dad used to have a sun shade like that" - they emigrated to Adelaide when they were younger and my sis was born there.

Sadly they came back to have me or my monkees could have joined yours on the beach .... and we could have both been arrested for taking photos!!